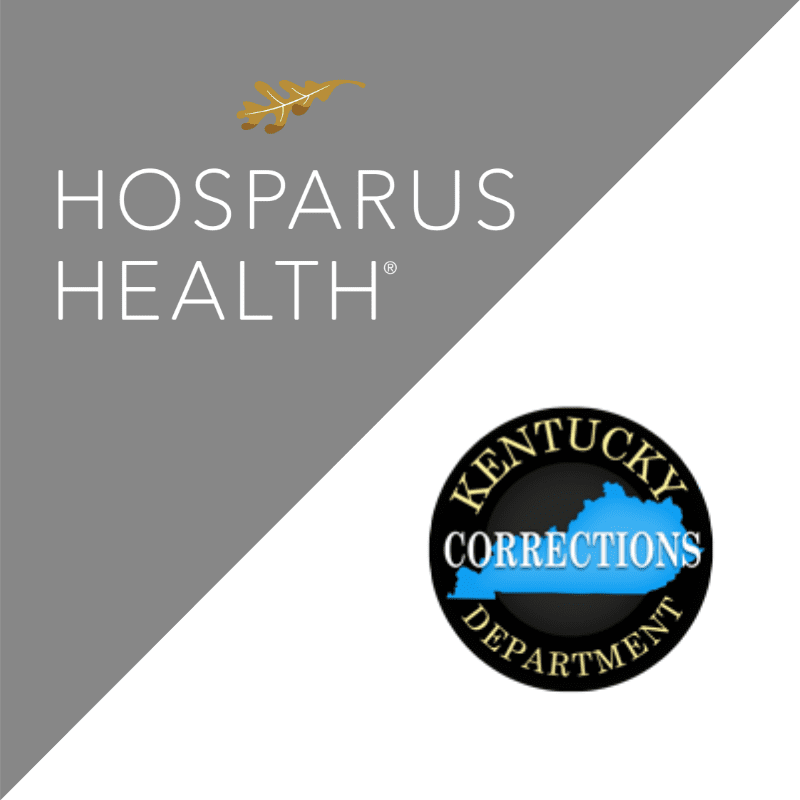 This week’s blog introduces a three-part series about Hosparus Health’s inmate volunteer program at the Kentucky State Reformatory, sharing stories of both the inmates who offer companionship and vigil to dying inmates, and the volunteers and staff who support the program.

On a bimonthly basis, a support team from Hosparus Health makes the short trip out to the Kentucky State Reformatory (KSR) LaGrange to meet with a group of Hosparus Health volunteers — incarcerated men in this medium security state prison.

The KSR volunteers have been trained by Hosparus Health staff, following the same training format for volunteers “on the street,” as the inmates refer to the outside world. Last year, 10 volunteers contributed just under 1,600 hours of service. The hospice inmates who are provided companionship and vigil visits are patients of the prison system, with their treatment administered by contracted medical staff of the prison.

There are two KSR staff members who oversee the hospice volunteer program, a licensed clinical social worker and a psychologist. They meet with the group during the month we don’t attend. Whenever a volunteer opening becomes available, they screen inmates to get into the program. Inmates must apply and have one year of clear conduct to become a hospice volunteer, and they must commit to a minimum of three hours each week, as well as being available as needed.

A deputy warden ultimately makes the final approval. The program guidelines are strict, and volunteers have been dismissed from the program for overstepping their boundaries. After one year of service, the volunteers receive 90 days “good time.” Most of the volunteers also have other jobs, including a legal aid, a pastoral care assistant, and a maintenance worker.

There is a waiting list for the 79 beds designated as medical care. KSR is the only prison facility in the state with a hospice program, and when the first prison volunteers began meeting with patients in October 1996, was one of a handful of prisons in the country offering hospice care.

Volunteer Tony Heitzman has been making visits for 25 years

One month on a recent visit, I pick up retired Hosparus Health chaplain and current volunteer Tony Heitzman not too far from the bakery his father Joseph ran at the Douglass Loop. It is his uncle’s bakery that lives on today as Heitzman’s. Tony has a rich background and is a great story teller. In our rides back and forth, I’ve learned much about Louisville legend and lore, Hosparus Health’s history, the program at KSR, and about Tony himself.

After he attended seminary, Tony was a pastor at St. Barnabas Catholic Church and Immaculate Heart of Mary, and then taught math at Trinity High School before beginning a career at Hospice of Louisville in 1987 as Director of Pastoral Care.

After picking up Tony, we meet grief counselor Jeff Meyer and volunteer Dr. George Webb at the main building to carpool to KSR, using our travel time to prepare for the visit. Once we have made it down the long driveway toward the looming 12-story tower, we parked and emptied our pockets of everything except for our identification.

The first stop is at the guard shack to get clearance to proceed to the main entrance. We walk under the scaffolding that has been recently erected to prevent the bricks from the falling-apart tower landing on visitors’ heads. Another guard unlocks the gate, allows us to enter, and locks us inside the prison lobby, where we hand over our IDs and get temporary prison passes. The guard calls one of the program coordinators to the entrance to escort us to the room where we will meet with the volunteers. While we wait, we go through a security check with a metal detecting wand and pat down.

We walk down the main corridor, catching up on what has been going on with the prison since our last visit, where a group of guards monitors a crossroad of hallways and another set of gates. The gate from the lobby is unlocked, we enter and wait for the gate to lock, another gate is unlocked and we walk down another hallway.

It’s a long walk from the car to the meeting room. Any time we pass an inmate walking on the other side of the hall, or waiting outside an office, Tony always acknowledges them and offers them a friendly greeting. He knows no strangers, nor does he need or want to know what landed an inmate in prison.

It has been about 25 years since Tony first got the call from Peter Houck, a chaplain at the prison, about starting a hospice program for the lifers who were dying. The idea was originally turned down by the warden, but a couple years later when warden Walt Chapleau came to the prison, he gave permission for the program to proceed. He had received hospice care for his mother and believed in the mission to train prison inmates to work with the terminally ill. Donna Urbansky, Director of Volunteers at the time for Hospice of Louisville, developed a training course for the prison and assembled a team of staff to support the inmates. At that time, and to this day, KSR is the only state prison facility with a nursing facility.

Hosparus Health believes everyone, no matter their circumstances, deserves care, comfort and compassion at the end of life. That’s why our prison program volunteers like Tony and the inmates he supports are such an important part of our mission. We could not do it without them.

Check the next blog in this series, Dr. George Webb’s story.