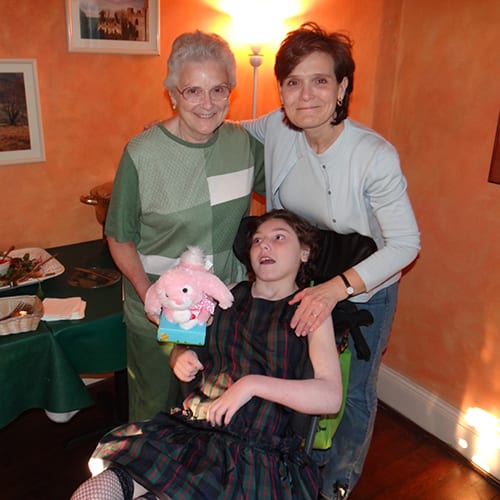 Taylor Gernert passed away at the young age of 17 after a lifetime of health challenges. Her mother, Susan, says Taylor was able to have “as peaceful an ending as possible” thanks to Hosparus Health’s Kourageous Kids program. She adds that Hosparus allowed the family to make the most of Taylor’s final months, and “I truly don’t know what we would have done without them.”

Taylor was born with lissencephaly, a disorder that affected her neurological and mental development, and she was given a life expectancy of only 12 months. While she was never able to walk or talk, the Gernerts gave Taylor as full a life as they possibly could, and she brought endless light and joy to theirs.

When Taylor’s health began to significantly decline about a year before she died, Susan heard about Kourageous Kids and made the call. The Care Team became her lifeline, helping to educate the Gernerts on all the resources that were available to them. “Hosparus helps you make the best of such a terrible, difficult thing in your life.”

Possibly the biggest help was Kourageous Kids’ 24/7 phone support, Susan says. She was grateful to have someone to call with questions, day or night. “There are those moments when you panic. It was so comforting to know we were not alone.”

The Kourageous Kids team did everything they could to help the Gernerts make the most of the time Taylor had left. The team helped them coordinate in-home nursing care so Susan could continue to work, but more than that, “they gave us back a sense of control,” she says.

After Taylor died, the Gernert’s Care Team helped them through the fog, calling family and friends and making necessary arrangements.

Susan wishes she had known about Kourageous Kids sooner, but like many people, she only knew about Hosparus Health’s services for adults. She was so grateful to access our expert pediatric care, because “caring for a terminally ill child is very different than caring for an adult.”

Susan says her “greatest frustration” as Taylor’s illness progressed was the lack of information about what services were available. With Hosparus Health, she felt like she had finally found an organization that cut through the bureaucracy, and told the family the truth about what to expect. Thanks to Hosparus Health, the Gernerts were able to relax a bit and enjoy their remaining time with Taylor.

“When I hear about families who are reluctant to involve Hosparus Health because they almost see it as a last resort, they don’t understand how much Hosparus can add to their lives,” Susan says.

We are so grateful to have been able to help this special young lady, and we are truly fortunate to have such a wonderful advocate in Susan.