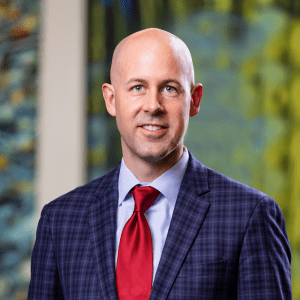 Scott Herrmann joined Hosparus Health in January 2019 and serves as Chief Strategy Officer. In his role, he works alongside CEO Phil Marshall to pinpoint new capital opportunities, align strategic partnerships, identify potential expansion opportunities and explore new ways to communicate the exceptional hospice and palliative care the nonprofit organization provides to thousands of families throughout Kentucky and Indiana each year.

Prior to joining Hosparus Health, Scott most recently served as Director of Economic Development with Louisville Forward, a department of Louisville Metro Government. In that position, he was responsible for the management and strategic planning of a 17-member team focused on advancing the economic prosperity of Jefferson County. He has also led strategic marketing and sales for Waycross Partners LLC investment firm, and worked for J.P. Morgan’s government, nonprofit and healthcare commercial banking and institutional asset management divisions.

A native of Evansville, Ind., Scott holds a bachelor of science degree in business and an MBA from Indiana University.