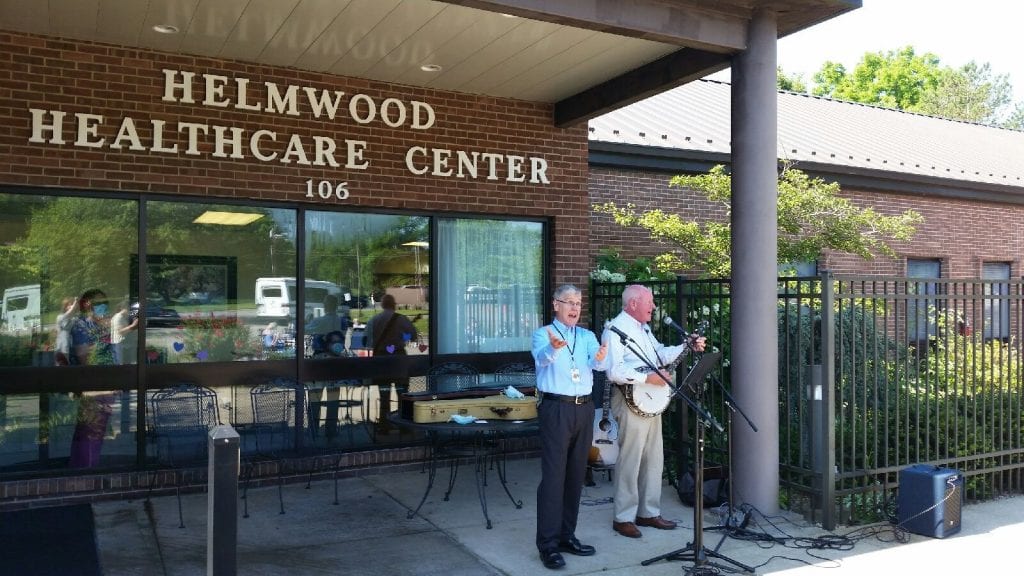 During this time of heightened restrictions and social distancing, many people — especially the elderly or medically fragile — may be feeling isolated and even depressed. Because we can’t be together right now, many of us have had to find alternate ways of connecting.

One way to do that is through the healing power of music. The team at Hosparus Health Central Kentucky recently called on some volunteer musicians to bring the gift of song to residents at area nursing homes and assisted living facilities.

In late May and early June, Volunteer Manager Annette Jones helped coordinate a series of free concerts in Grayson and Hardin counties. In Leitchfield, Justamere Bluegrass Band performed for residents at Springview Nursing and Rehab, Grayson Nursing and Rehab and Beehive Assisted Living. It was a beautiful day for these outdoor concerts, and all who listened had their spirits lifted.

In E-town, Dean Sears and Gary Vidito — both former cast members of The Stephen Foster Story – graciously donated their time to bring the joyous music of Stephen Foster to residents and staff at Helmwood Healthcare Center, Elizabethtown Health and Rehab Center and Signature Healthcare of Elizabethtown. Click here to watch them perform “My Old Kentucky Home.”

Dean has been a patient care volunteer for Hosparus Health for about five years. He says that during this time of lockdown, so many nursing home residents have been kept apart from not only their loved ones, but from routine contact with the outside world.

Music is a universal communication tool, he says. “When Annette suggested this to me, I jumped at the chance. I had hoped that Gary singing and playing the banjo/guitar, and me singing along, would be a bright spot in the day of those who heard us.”

It certainly was! Dean says he saw many people singing with the duo, some even tapping their feet and attempting to dance a bit in their seats. “That was fantastic!” he says. “We also heard feedback that some who had been particularly affected by this isolation ‘came out of their shell’ and found a new, albeit, temporary stay from the gloom.”

One patient, who had recently stopped eating, began having regular meals after the concert. Hosparus Health RN Kristi Lawrence says that prior to the pandemic, he often spent time in his wheelchair, was very sociable and had an excellent appetite. Soon after being socially isolated in his room as required by health and safety guidelines, he began sleeping more and spending more time in his bed than his chair. As the weeks went on, he stopped eating.

On the day of Dean and Gary’s concert, facility staff encouraged the patient to get up in his chair, and go outside to listen to the music.  He did, and he has been eating at least one meal a day since then.

“I’m so grateful to our volunteers who found a creative way to touch my patient’s heart when it was not possible to reach out physically,” Kristi says.

Dean says that he loved the opportunity to take some time out of his normal workday and step into a role of service.

“God gifted me with gift of singing, and it often fills me with a sense of his pleasure to share that with others,” he says. “Music is often an expression of love, and that is indeed what Gary and I were able to provide for the residents on that day. To take the time to love someone, to spend the time letting them know that they are loved, that was the true gift of the day.”

Thank you to Dean and Gary, the Justamere Bluegrass Band and all the facilities that allowed us to bring some joy and comfort to those who needed it most during these challenging times!