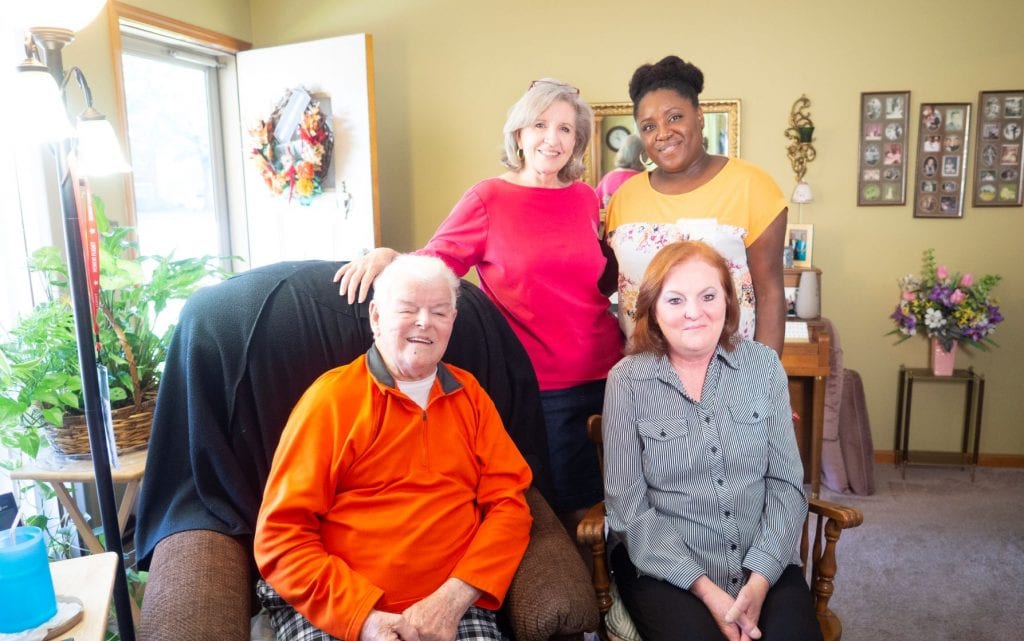 Hosparus Health patient and World War II veteran Frank DeYoe says his Sept. 12 Honor Flight was “the happiest day I’ve had in a long time. I was really, really excited from the moment I found out I was going until the moment I got up there.”

Honor Flight Bluegrass is a local nonprofit that flies veterans to Washington, D.C. to visit major war memorials and reflect on their service. Priority is given to World War II and Korean War veterans, as well as those who have been diagnosed with a terminal illness.

Frank says he wanted to take the trip for a long time, but didn’t know how to begin. He mentioned it to his Hosparus Health volunteer, Lin Kalson, a veteran herself. Lin helped Frank’s daughter, Yvonne Holmes, apply to get him on the September flight, and he loved every minute of it.

When Frank and the other vets returned to the airport, almost 1,000 supporters greeted them. “I had been told that there is always a big reception, but this was far, far beyond,” Yvonne says.

“It was just so wonderful to know that there are people that really, really care” about our veterans.

“I was so excited to see so many people,” Frank says. “It made me feel special.”
Lin could not be there to welcome him home, but Frank told her all about his trip during their regular Wednesday afternoon visit afterward. “It was just a joy hearing how much he enjoyed himself,” she says.

About 25 percent of those who die every year in the United States are armed services veterans, but many still do not know what services are available to them at the end of life. To help ensure every veteran in our community gets the care they deserve, Hosparus Health is a Level Four partner in We Honor Veterans, a national program that allows us to give our staff and volunteers like Lin the resources and training they need to provide specialized veteran care. In 2017 and 2018, about 18% of Hosparus Health’s patients were veterans.

In addition to her Wednesday visits, Lin presented Frank with a special veteran recognition certificate and patriotic blanket during a special We Honor Veterans ceremony. She also completed a life legacy review to record his history, so his family will have it after he’s gone.

“I love to work with veterans,” Lin says. “There’s a camaraderie that exists when they know that you were active duty. They put you in a whole different category than everybody else who’s trying to help.” Lin adds that she is honored to support our nation’s heroes like Frank – and their heroic family caregivers like Yvonne. “I do this because it feeds and nourishes me,” she says.

Lin and everyone else on her dad’s care team has been a huge blessing, Yvonne says. “The support has been great. I don’t think I could live without them now. I’m sure that I couldn’t.”